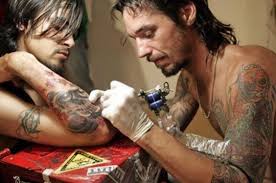 Back in my younger days, I had a small rebellious streak. I do mean very small. As a suburban youth, it is your duty to rebel against every rule your parents have put into place. I was not the most ambitious of suburban youths, though, so while many of my classmates were out carousing and getting into all kinds of mischief, my rebellion was presented through a fondness for punk rock and a general surliness that was borrowed from Holden Caulfield.

The one rebellion I was certain I would partake in just as soon as the age came where I did not have to present prior written and notarized consent of my parent or court appointed guardian was to get a tattoo. I have always thought tattoos were cool. I was convinced that this would be the final step in becoming the edgy individual I wanted to be. Nevermind the fact that, at that same moment, every single person I was going to school with had the same thought making that idea significantly less edgy.

The next question, though, was what tattoo would be appropriate for me. I needed something that had a deeper meaning. After all, this would be a picture that was etched onto my body for the rest of my life.  That is presumably a very long time to have something on my body.

I spent time brainstorming. I thought for hours about what the ideal tattoo would be for me. Those hours turned into days, the days into weeks, and eventually you get to me sitting on the couch, my skin completely free of any illustrations. It turns out that as indecisive as I am about everyday things such as restaurants, I am roughly 10,000 times as indecisive when it comes to letting strangers doodle on me with an incredibly sharp needle.

There are some days I wish I could be more decisive. I know the great ship tattoo has not sailed into the sunset quite yet, but every year I age, I become significantly less likely to decide on something.

Then there are other days when I am glad I did not make a snap decision to have a tattoo that, at that moment in time, was very important to me. I am pretty sure that I would have regretted it about a week later when I realized that I had made a terrible judgmental error in what would really be the most defining thing about me for the rest of my life.

On the one hand, I want to applaud his fandom. On the other, though, if I were this man, I would spend a majority of my life worrying that Lebron James and the Miami Heat would part ways when his contract runs out. Sure, that will not be until 2016, but nothing would make me feel more ridiculous than having a Miami Heat Lebron tattoo if he has signed a contract with, we’ll say, the Sacramento Kings.

Yes, if you make a bad tattoo decision, a good tattoo artist can usually alter it. They are also doing amazing things with lasers these days, but even at my most rebellious, I was not confident enough to get a tattoo.

Someday, I will have children and they too will be trying to rebel. They will be listening to music I hate (probably some sort of terrible Skrillex dub-step, electro house music that makes my ears bleed) and thinking of getting a tattoo themselves. I will just sit back betting that, like their old man, they are far too indecisive to pick anything.

Besides, at the rate things are going now, the rebellious thing in 20 years may be NOT getting a tattoo. Maybe I was just ahead of my time…