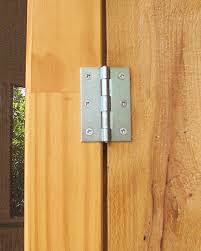 This does not mix well with hair.

I was on my way to the parking lot. My wife needed picked up and, like the dutiful husband I am, I had decided that making her walk the 8.3 miles home would be a bit rude. I exited my apartment and headed out the door when something made me turn back.

There, in the top hinge of the entrance, was one clump of curly black hair.

This is not something you see every day. The hair clump had been tangled into the hinge, its fibers woven in and out of the metal labyrinth. Now it was just there, dangling.

This was definitely the scene of something less than ideal. My mind immediately went to the worst place it could go. I could see the episode of “Dateline” playing in my mind. I would be interviewed, the phrase “Discovered The Hair Clump” printed under my name as I told the harrowing story of how I had stumbled upon this mystery hair. My face would be dimly lit for dramatic effect as I recounted my attempt to exit followed by my double take of the hair.

Maybe the previous owner of the hair was never involved in this hinge fiasco. The episode of “Dateline” in which I had found myself involved might show that this hair was actually planted there in order to frame someone for a crime. Perhaps they wanted to make it look like the maintenance team responsible for maintaining the hinges had perpetrated some sort of heinous act. Why they were so opposed to the maintenance team is beyond me, but if I had to guess, it probably had something to do with their inability to properly stop leaking pipes.

Of course, that was some glass half-empty thinking right there. I tried to come up with a more positive outcome, one that would not lead to a story on a primetime newsmagazine program. Surely there must be a reasonable explanation why a clump of hair without a person attached to it would be in a door hinge.

Best case scenario seemed to be that someone with a very large head of hair had gotten excited about some news they had received. Maybe they won the lottery or a new car or maybe even found out that a stain had come out of their favorite sweatshirt. Whatever it was, in this glass half-full scenario, it was fantastic news.

As they jumped about in the hall celebrating, their celebration became a bit too overzealous. Just as this big hair individual was about to run out of the hall to tell all of their friends about their newfound fortune/ stain-free clothing, something caught hold of their gigantic shrub of a head of hair. They immediately stopped celebrating and looked up to see that, once again, they had gotten their hair stuck inside of a door hinge. If you have a giant head of hair like I imagine they did, this is not as uncommon of an event as it should be.

After spending a great deal of time trying to untangle their hair, they came to a very important realization: it was not coming out. There was only one option left. That big-haired individual closed their eyes, gritted their teeth, then yanked with all their might. Sure, it hurt, but they were free from the door and could buy extensions with their newfound lottery winnings, or at least a hat to cover that up.

The best case scenario is still not a great one.

I went and picked up my wife and came home. No one had come back to claim that hunk of lost hair. It will forever be entangled in the door hinge. Someday I can bring my kids to this very apartment building and point at the hair, telling them all about the time I saw it. They will look at me with a look that says “Why are we looking at a hairy hinge? I have better things to be doing.”

I will say to them, “Kids, that is why I always say people with big hair should be careful. You never know when you might encounter a door hinge.”

That is a very valuable lesson for all.