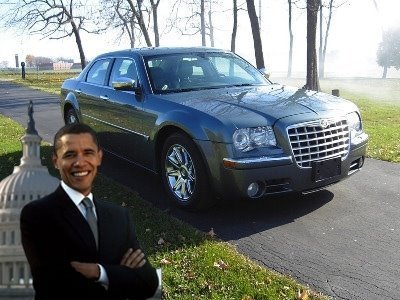 As a poor man, I spend a lot of time on eBay. I would very much like to own a Gibson guitar or a Canon Rebel. I, however, have to spend my money on stupid things like rent and food. On eBay, though, I can dream that maybe, just maybe, a $10 bid might win me something of great value.

EBay is meant to be a place for dreamers like me. People who have no chance of winning something for their original bid, but for some bizarre reason still hold out hope, should be able to log onto eBay with the delusion that this time, they might get what they want. It shouldn’t be used for expensive, out of reach items.

It definitely shouldn’t be for a 2005 Chrysler 300C that is starting at $1 million. Unfortunately, that is what someone named Cubfanatic23 is using it for.

Since most 2005 Chrysler 300C’s are worth less than $15,000, this auction might seem ridiculous. Who would pay this much for a car that isn’t also a time machine or made of a giant pearl? In fact, if you have $1 million to throw at a car, you most likely aren’t going to be interested in one that you could find parked next to a Honda Civic in a used car lot. It’s more likely to be a car that has a gold-plated muffler and a 56” Plasma screen in the backseat.

This car isn’t for the just any super-rich guy. You won’t hear Jay-Z talking about his 2005 Chrysler on his next single. No, this car is more likely for the super-rich history nerd.

This is a car that belonged to President Barack Obama.

There is a terrific amount of history behind Barack Obama’s car. For one, he drove it. Since he is a president, this counts as a historical factoid suitable for bragging use at parties.

Secondly, Obama drove this car at the time he gave a speech about the need for more efficient gas mileage from auto makers. Since his car was getting a lackluster 18 miles per gallon, he quickly traded it in for a Ford Escape hybrid to avoid people calling him an earth-murdering sack of hypocrisy. If I were him, I would have pointed out that it does get a much more impressive sounding 28.97 kilometers per gallon, but that’s why I would make a lousy politician.

Just because Barack Obama drove this car while he was in office, it is suddenly of great value to someone. It’s like Obama is a modern-day King Midas, turning all cars into uber-rare vehicles that no one can afford.

That’s why I would like to take a second to ask for a favor from President Obama.

Mr. President, I’ve heard that you would like to boost the economy. This is a very good idea, I believe. Much like the American economy, my personal economy is in the toilet. I know people have said things about money not creating happiness, but I’d really like to try it out for myself.

This is where you come in, Mr. President.

Since you seem to drive up the value of cars, you would really be boosting the economy by doing something memorable with my car. For instance, you could drive it into the capital during one of Congress’ joint sessions. Maybe, since you have spoken about your man-crush on Abraham Lincoln, you could throw on a fake beard and a stove-pipe hat and recite the Gettysburg Address from the backseat. I’ll let you use your imagination on this. You seem pretty smart.

So remember, Mr. President, doing this favor for me is really doing a favor for the nation as a whole. If you want to be reelected, you must make my car worth a small fortune.

It will definitely make you more likeable than Newt Gingrich. Not that that’s hard.

15 thoughts on “Barack Obama: The King Midas of Cars”