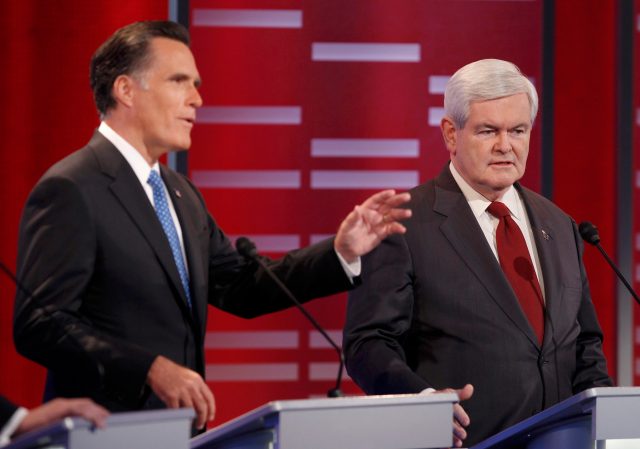 Warning: The following is to be read in a sarcastic tone. If you at any point in time find yourself agreeing with anything written here, please go sit in a dark room and think long and hard about your life.

Just like most of America, I have been eagerly awaiting the 2012 presidential election. Our country is imploding around us and having that Barack Obama (if that is his real name) in the White House has not helped. I don’t know if you’ve heard, but all he cares about is squashing freedom.

Since I am a huge fan of freedom, I have been waiting for a worthy challenger to restore the state of this fine country of ours, bringing it back to the days of the founding fathers. That was when freedom was at its highest, at least for those who happened to be Caucasian male Protestants.

Since the Republican debates began in May of last year, a full year and a half before the election, I have been trying to pick my candidate of choice. I’ve studied each and every one of them in depth. Unfortunately, picking a candidate amongst this virtual dream team of politicians has been near impossible.

This week, though, the race was turned upside down. One candidate identified the issue I was most concerned about, faced it head on, and then proceeded to drive home his point with all the finesse of a meteorite hitting a nuclear power plant.

For months, I have been concerned about this front runner, Mitt Romney. Through all the debates, Romney has spoken about what is best for “our” country and how “we” can work together to fix “our” problems. I have been skeptical, to say the least. Sure, he says he is concerned about America, but how am I to know he is a real American patriot?

Apparently, I am not the only one who has been concerned with this. Newt “Giant Head” Gingrich sent his best people on a fact finding mission about Romney. What they found may disturb you.

According to the latest Gingrich web ad, Mitt Romney is fluent in… FRENCH!

I’ve always suspected something like this about Romney. Now we have confirmation that Romney, indeed, hates America.

As any proud American will tell you, no one who loves America would bother to learn another language, especially French. Everyone knows that English is the language God intended all of his people to speak. Anyone who speaks French is most likely a freedom-hating, God-less socialist who is solely focused on world destruction and calling snails a “delicacy.” The only place French belongs is in foreign films that critics will rave about but we will never actually watch.

When Romney fled to France for two years, calling it his Mormon mission, he essentially turned his back on these United States. The worst part is Romney doesn’t even attempt to hide his ability to speak other languages. He even recorded videos welcoming the French countries to the 2002 Olympics that were hosted in Salt Lake City. Any patriot knows that if an athlete is going to compete in America, they can either learn our language or leave.

With this ad, Gingrich has showed what we need in a president: a healthy dislike of anything foreign to us. Why, just imagine how quickly the Iraq war would have ended if we had gone in and shot at anything that moves instead of worrying about the target being a civilian. After all, that civilian chose to be born in a country that we don’t get along with. If they don’t like it, they should just move.

Of course, Gingrich is being attacked by the liberal media. They say that this incredibly truthful attack against Romney is unjust and stupid, pointing out that Gingrich lived in France as a teenager and in his doctoral thesis he cited sources that were only published in French.

The difference is this: while Romney was gallivanting around in France, enjoying the culture and embracing all that makes France the worst country in the world, Gingrich was infiltrating from within. If we elect Gingrich, not only will we have elected the first President who can’t fit his head through a doorway, but we will have also found one who has a working knowledge of our darkest enemy.

So, Newt, stand strong. I’m sure, with a name like Newt, you are used to being given a hard time. Keep speaking the hard truths and people will eventually embrace you.

Well, all the real patriots will. Anyone who doesn’t is just a French-loving heathen. You don’t want their vote anyway.