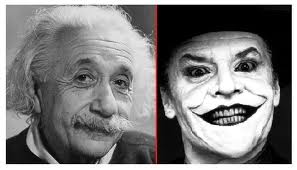 There is a very common phrase that says, “There is a thin line between genius and insanity.” It is, in essence, saying that if we were to map genius and insanity, they would be Canada and the United States. Albert Einstein and Charles Manson would be close enough to touch, but still not quite in the same territory, with Einstein focusing on what M might equal and Manson focusing on homicidal messages in Beatles songs. I guess they would be unlikely to grab a Pumpkin Chai latte together, but there is a chance they might end up at the same Starbucks.

There are a lot of phrases like this that are just stupid. A dog might be a man’s best friend, but that is a very sad man. If it “ain’t” broke, I won’t fix it, but I probably couldn’t fix it if it was broken. Sure, it isn’t over until the fat lady sings, but what if she is slow getting there? She is, after all, very over weight. I would imagine she moves very slowly and a lot of things end before she starts singing.

While those may be stupid nonsense phrases, there really is a thin line between genius and insanity. This is just a dumb phrase, it is a fact of life.

What if the Earth had been flat, though? We would sit around telling the story of that moron who sailed off the edge of the planet because he thought it was round.

“What an idiot,” we would say. “What a big stupid moron. What kind of sane person would think the world was round? Man, I am so glad I’m not as dumb as that stupid Christopher Columbus.”

Sure, he turned out to be right. (About the shape of the planet. He was totally wrong about where India was, but that’s a completely different story.) He could just have easily, though, fallen off of the planet and plummeted to the bottom of the universe, splatting on the universe floor and leaving a mess for the universe to mop up.

The line, though, has not gotten any wider in recent years.

Imagine for a second I walk up to you and say the following: “I have a million dollar idea. Why don’t we take some blankets and sew sleeves on them?” Your gut reaction would be to smack me upside the head, call me names, and continue to berate me until I cried. You would probably hold that urge inside and just tell me this was an insane idea. No one would ever buy sleeved blankets except maybe mental patients.

Well, guess again muchacho. By 2009, a little company named Snuggie had made $40 million off of the insane idea of sleeved blankets. It turns out people really like their blankets to have sleeves. They also like to buy crappy presents for people, thus the marketplace was primed for genius product like Snuggies. What seemed insane was actually a stroke of brilliance.

Since this line is now a proven fact, I have been trying to figure out where I’m at. Am I on the genius side or the insane side? Maybe I’m not even near the line. Maybe I’m all the way over there in an area named “boring and obnoxious” and I’ll never be near the genius/coocoo for cocoa puffs line.

I do know one thing for sure, though. I may not be near the line. I may not even be on the same planet as the line. The line may be a completely foreign concept that I will never, ever encounter in my life.

With that said, though, I have approximately 8,000 ideas a day. Each and every one of those ideas are less insane than the Snuggie.

Seriously, guys. A blanket with sleeves. Good work, you nutjobs.

14 thoughts on “The Thin Line Between Genius and Insanity: Really, Guys. It is Super Thin.”