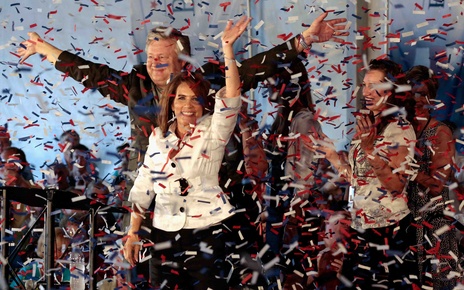 When I was a kid, teachers would say that anyone could be president. Never mind the fact that there had never been a Black, Hispanic, Native American, Asian American, albino, Inuit, Pacific Islander, Mormon, Hindu, Muslim, Wiccan, Atheist, Blind, Deaf or female president in the history of America. We all thought we would someday sit in the Oval Office, discussing with our Vice President why the office could not be rectangular like any other office would be.

Then I grew up. I watched the news and found out that, while being the president has its perks, there are a lot of negative things attached to the Presidency. Unfortunately, Air Force One is not cool enough to make up for the fact that there are nuts who want to shoot you and people who blame you for everything whether you were involved in it or not.

If you didn’t react to a problem, you should have. If you reacted to a problem, it wasn’t quick enough. If you somehow became psychic, knowing the problem was happening and reacted to it, stopping it before anyone’s life was ruined, odds are people would complain about the amount of “pizzazz” you employed preventing disasters. Nothing is ever good enough.

To me, it looks like being President would suck.

The only thing worse than being President would be campaigning for President. People would be digging into your entire life, trying to find every bad thing you have ever done. All of a sudden, a reporter is telling the world about the time you only tipped 10% at your local Olive Garden.

Now that the race for President is almost only a year away, we get to hear these stories about every presidential candidate every hour of every day. Every candidate has their issues that people constantly bring up. Mitt Romney is Mormon. Rick Perry is a Texas Republican. Michele Bachman is clinically insane. At this point, I would not be surprised to hear about Ron Paul’s dietary restrictions (Don’t give him too much cheese. it makes him gassy.).

The election is still over a year away. Why should I care?

Maybe I’m not patriotic for saying this. That is a distinct possibility. I tend to make fun of America quite a bit, but only because we’re all fat mouth breathers who can’t read past a fourth grade reading level. In fact, declaring my lack of caring about the presidential election this early seems like one of the less offensive things I have said about this country.

It seems that we have turned the presidential campaigning into Entertainment Tonight: Political Edition. Instead of these congressmen doing their current jobs, they are busy eating pork chops at a state fair in an attempt to get a new job. Instead of ignoring them, we give them our attention. Suddenly these people are mixing it up with Whoopie Goldberg on The View or trying to prove how hip they are on The Daily Show.

If they are funny and charming, good for them. I still don’t care.

If you were to turn on the radio, TV, internet, or, for those lacking technological skills, open one of those archaic newspapers, you would think that this is the most pressing issue in our country. Every interview with our current president is about how he wants to be president again, not about our debt rating, unemployment, or the upcoming destruction of our country via alien attacks (due to arrive March, 2012). Instead of hearing about Kim Kardashian or Lindsay Lohan, we get to hear about senators (I actually am very thankful for this fact).

Despite all of this, though, I still don’t care.

How could they make me care? It would be simple. All I want to know is what they think. I don’t want to hear about how great the country is or how you respect the armed forces or how totally neat-o it would be to maybe someday get your face on some money or, if you’re really lucky, get some sort of giant marble thing erected in your honor.

I just want to know if I agree with you.

Of course, this seems unlikely. Why would you want to just come straight out and tell me what you think? You wouldn’t, now would you, politicians?

The only other way to get me to care is to have the candidates compete on Cupcake Wars. The winner gets a nomination for President and a contract to make cupcakes for their own inauguration. The loser has to go back to Congress and be publicly shamed, hearing other Senators calling out, “Nice job with the Red, White, and Blueberry cupcake, you idiot! Cream cheese AND confectioner’s sugar?! What is wrong with you?!”

Until either of these things happen, don’t expect me to care about the Presidential race. After all there is only one thing that would suck more than campaigning for President: That is listening to someone campaign for President.

8 thoughts on “Campaigning For President: Only Slightly More Fun Than a Shark Attack”