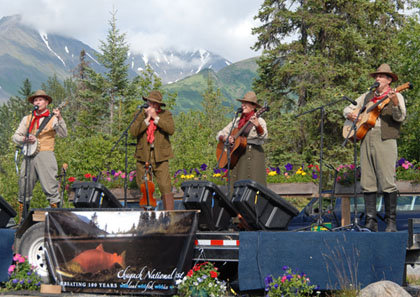 Look! It's the Fiddlin Foresters! They're like the Lady Gaga of forest based bluegrass bands!

Fortunately, our government is on the job. Vice President Joe Biden has stopped all of his current activities and thrown his attention into fixing our economic woes. Helping the country tighten its belt is of much bigger importance than his prior job of eating Doritos and watching The View.

Tightening our belt, though, means we have to get rid of some things that are valuable and necessary for, not only our country, but the entire world.

That is why we must bid farewell to everyone’s favorite website devoted to foresters who play the fiddle, www.fiddlinforesters.gov.

Yes, this truly is a dark time in our country’s history.

I am sure that you, much like me, are worried about the effects that this change could bring with it. Without this site, how many children will grow up never realizing that they can play the fiddle AND cut down trees? Without this site, will foresters still have an outlet to express their creativity? And without fiddling, how can foresters expect to keep the trees from fighting back? They certainly won’t be able to lull them into a false sense of relaxation anymore. The trees will see those saws and immediately know that these foresters aren’t there for an impromptu hoedown.

These are risks that we, as a country, are just going to have to take. Our debt is out of control, and we must rangle it in. This is just the first step.

See, cutting this website will save the government roughly $20 a year. That means that to completely eliminate the United States national debt, we would only have to cut roughly 717,572,578,277 government websites.  So, goodbye http://www.fiddlinforesters.gov. Farewell www.destertortoise.gov. Sayonara www.superjustinbeiberfanclubohmygoodnesshishairissodreamy.gov. You’re no longer viable.

This kind of activity couldn’t come at a better time. It seems that even America’s symbols are getting fed up with us.

In Alaska, two bald eagles have taken to sitting outside of a post office and dive bombing customers, even drawing blood on occasion. When authorities asked the eagles why they were doing this, they replied, “SQUAAAAAAAAAAA!!!!!” which in eaglespeak means, “We no longer what to be associated with a government run institution like the post office. We will continue to dive bomb until our faces are removed from the postal service’s logo or the national debt is decreased. Really, it’s your choice.” Eagles can say a lot with one Squaaaaa.

The removal of ridiculous government websites is definitely a start. I, however, would like to propose an even more drastic plan that would not only get us out of debt, but give us a surplus of money.

I vote we sell the Dakotas.

I’m sure that Canada would like nothing more than to take some of our land away from us. We have, after all, taken so many hockey teams away from them. It seems only fair that we offer to sell them to of our least important states to make up for it.

Really, what would we be losing? The world’s largest cow, Salem Sue? (Totally real, by the way. Look it up.) The Fargo walk of fame and Roger Maris museum?

Yes, Mount Rushmore is pretty cool, but I can see pictures of those presidents on money and in history books. I don’t need to travel to a mountain to see them.

If Canada doesn’t want the Dakotas, throw in Montana to, just to sweeten the pot. Montana holds a bit more value. Plus, we don’t need all of the nuts with guns up there anyway. They’re crazy!

With this plan, we should be able to bail our country out of the worst economic crisis seen in decades. We might even have enough money left over to save www.fiddlinforesters.gov.

After all, do you really want your children to grow up in a country without fiddling foresters? Me neither.

Your states really are important. I am sorry if I have offended you by saying they weren’t. I’m not sure why they’re important, but I bet they are. Plus, they only sort of smell like cows.

You guys could be worse. You could be Montana.