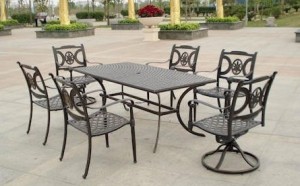 I have always fancied myself good at puzzles. Sudoku’s? I’m a master. Crosswords? What’s a five letter word for “an action Nathan employs against even the most difficult crosswords?” (Crush)

There is a type of puzzle, though, that is more challenging than any other. A puzzle so devious that the very sight of it is likely to make one shudder.

The puzzle of patio furniture.

Since moving into my current abode, our tiny backyard has looked like a tiny set from “I Am Legend.” Piles of dirt and rotting leaves from my neighbor’s tree covered up a useless cement slab as well as any sort of plant that might survive in the hellish landscape. It had grown so bad that even my dog had decided the yard was not good enough to hold her waste, taking care of business in the middle of the cement before returning inside.

As the weather turned nice, I wanted to go outside. The only issue was going outside made me want to jab my eyes out with a fork so I wouldn’t have to witness the yard.

There was only one answer: move. Unfortunately, I hate packing more than yardwork, so my wife and I did the next best thing: work on cleaning up the yard.

First, we removed our inadvertent compost heap. Then, I began building a small pond off to the side of the yard. My wife began planting a garden, and suddenly, the backyard was…well, I guess less terrible would be the only way to describe it. Not great, but less likely to cause thoughts of suicide.

The final pieces of the puzzle came in the form of a belated birthday gift from my mother-in-law. Wrought iron chairs, table and a fire pit would make that useless cement slab a nice patio area.

There was a catch, though.

The table came in a two inch wide box.

I did not want to open the box because I knew exactly what I would find there. Inside sat a table top along with what seemed to be 250 million other pieces. Each piece was wrapped in paper and taped to another part of the box, making it near impossible to locate anything.

I spent the next 20 minutes going through paper, examining each square inch of it like I was in a Dan Brown novel. Finally, taped to the second of three layers of paper that had encased the tabletop (why a wrought iron tabletop needs that much protection I will never understand), I saw them. I had, at last, located the screws.

The first step was to use these tiny screws to attach legs to the table. This step should be very easy, I thought. Four legs, four screws, this should take no time at all.

Have you ever tried to balance on one foot while putting a shoe on the other? That would be less complicated then attempting to balance one of these table legs while you use the included hex wrench (Latin for incredibly useless tool) to tighten the screw. The legs seemed to have a vendetta against me, attacking my face and head while I worked.

After what must have been 36 straight hours of work on this table, my table finally had legs. To keep the legs from collapsing, though, a small circular shelf had to be placed in between the four demonic legs.

Thirty minutes later, I finally find this shelf, and, naturally, it is taped to the inside bottom of the box.

I began the simple task of screwing it on. I remember in school, we had a lesson covering simple machines. The screw was one of those simple machines. It is the easiest way to attach two things together.

That is only true, though, if the holes for the screws are lined up correctly.

Discouraged, I gave up after one screw, planning on finishing the project later that day.

I felt like a failure, having been outsmarted by piece of furniture. All day, I thought about this massive crushing blow to my ego. I couldn’t think of a way it could get worse.

Well, when I got home, the table was finished and outside. My wife had finished my husbandly duty.

I’m sure the natural reaction would be to feel less like a man. After all, building things is a manly job, meant to be done by rough and tumble dudes with five o’clock shadows and leather jackets, such a natural instinct that they don’t even bother putting out their cigars while they do it. My testosterone level should have been at an all time low.

Fortunately, I know I’m not a manly man. I saw the table was done and thought, “Good riddance.”

Should I have felt like a weenie? Probably, but I’m not going to care at all when I use that table, so why would I care now?

Besides, I got it started for her. That counts for something, right? Right?

5 thoughts on “Ready to Use Patio Furniture, Some Assembly Required”