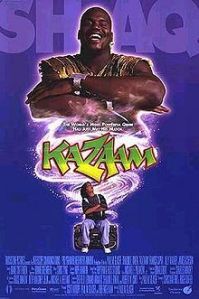 File this in the “I Wish I Was Making This Up File.”

Boston, MA– Shaquille O’Neal has done it all: Become a basketball MVP, a successful rapper, a law enforcement official, and an actor. Now that he’s accomplished it all, why not do it again?

That’s the attitude O’Neal, currently the back-up center for the Boston Celtics, had in a postgame conference after Thursday’s game against the San Antonio Spurs when asked about his potential retirement.

“I’m not going to retire,” O’Neal said. “I have big plans. This offseason, I’m starting filming on Kazaam 2.”

With that, Twitter became abuzz. Kazaam, a 1996 film, starred O’Neal as a larger than life genie who takes shelter in a boombox. After being found by a child in an abandoned building, O’Neal’s character goes on to help Max locate his father. The film was universally panned, currently ranking in the bottom 100 on IMDB.

This time around, O’Neal has different plans.

“I’d like to show Max all grown up and he finds Kazaam again,” O’Neal said. “This time around, though, Kazaam introduces Max to the whole genie crew. Maybe he helps Max find a job after college. That’s a very relatable topic.”

The members of the genie crew have already been linked to singer Rihanna and basketball superstar Lebron James, with production on the film scheduled to begin in the next week. Michael Bay is currently attached to direct.

“It will be more emotional than the first Kazaam,” said Bay via phone. “[Shaq] has an incredible acting range most people aren’t aware of. I bet most people don’t even realize he can cry on cue.”

While O’Neal’s sights are currently set on Hollywood, he hasn’t forgotten what originally put him in the limelight.

“I think I have a good five years of basketball left in me,” O’Neal said. “I don’t know what NBA team I’ll bring my talents to, but you know Superman always brings it.”

As for a date for filming to begin, O’Neal will wait until the end of the Celtic’s season.

“It won’t be until the end of April, though,” O’Neal said with a sly grin. “We have to get a ring first.”

Hollywood can’t possibly be that desperate for scripts, can it?

7 thoughts on “Coming Soon To A Theatre Near You: Kazaam 2”