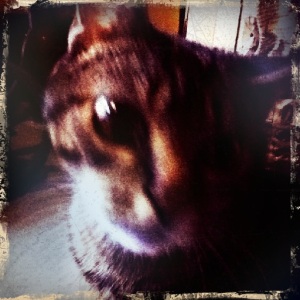 The face of Satan

I want to say before I start that I don’t hate cats. It’s going to sound like I do, but I don’t. Dislike them, yes. Wish they would leave me alone, absolutely. But hate? No. With that said, anyone who thinks cats are better pets than dogs has never been around either animal or at some point in their childhood suffered head trauma so severe that they have been living with a concussion ever since.

Take my cat (….please. I know its lame, but every bad comedian is laughing hysterically now, and I’ve got to appeal to people). When I met the woman who would become my wife, I thought this cat was okay. He seemed friendly enough.

That is, until the first time I went to the bathroom.

As I opened the door, demonic eyes glowed from across the room. I quickly turned on the lights to expose this demon, only to find a slightly overweight cat sitting on the sink. As I, how should I say it, approached the waste receptacle, the cat immediately began rubbing against my leg.

Now, I have no problem with cats rubbing against my leg. It is very friendly and affectionate. But this activity should be limited to times my pants are zipped. Any other time is off limits.

As time passed, this cat grew. He now weighs roughly 600 pounds. I spend half of my day walking around this behemoth of a cat and the other half accidentally tripping over his gigantic sprawled out body. This is not helped by the fact that his favorite location in our home is right outside the shower, making it virtually impossible to get out without either kicking the cat or falling on your face.

He also has developed a habit where he thinks the proper time to sit on my lap is when I am sitting on the aforementioned waste receptacle. He will jump on my lap. I will push him off. He will look at me, slightly confused, then immediately jump back on.

How did my life become run by a cat?

I have a feeling that my cat realizes I feel this way about him. I also think he doesn’t really care for it. I woke up yesterday morning to find a scratch on my chest reaching from my neck to my bellybutton. When I went into the bathroom for our morning lap ritual, I swear I could hear him laughing.

What devious things could this vicious animal have planned for me? Will I wake up one day with the head of a mouse in my bed? Will he decide that litter boxes are for losers and start using my shoes for his business? Will he get bigger and bigger until he finally fills my apartment to the brim with cat, suffocating me in his itchy cat hair? Someday, I truly expect this cat to reenact the entire Saw franchise with me as the victim.

But I’m on my guard. There is nothing that can distract me from the possible maiming that is certainly coming my way.

Besides that, though, this cat is pure evil in a soft furry package. I’m on my guard. There is no way to distract…. Awwwww. Shhhh. He’s sleeping. How adorable.

4 thoughts on “Cats: The Perfect Pet (If You Love Pure Evil)”