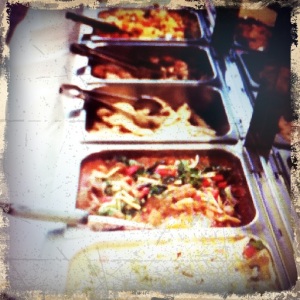 The light bulb, the automobile, the Hostess Twinkie. We are living in the age of the greatest advances in technology that this world has ever seen. From the iPad to the cotton polyester blend, we can accomplish anything we want. One creation, though, will go down as the greatest idea man has ever had.

I’m talking about the buffet.

Yes, gluttony can inspire. Thanks in part to  these monuments to obesity, I can now go to a restaurant and have steak, spaghetti, and a hamburger all in the same meal. I, of course, wouldn’t because I would immediately slip into a cardiac arrest and die.

Despite the genius, I myself have a love/hate relationship with the buffet. I love the variety of foods. I hate everyone there. I do mean everyone.

Last night, my wife and I entered an all you can eat salad buffet. This used to be called a salad bar, but people kept wandering in expecting a lettuce flavored cocktail, so the name was changed. This was the worst buffet experience of my life.

You might have noticed that many buffets have started calling themselves “All you care to eat” instead of “All you can eat.” This is most likely because the hoards of buffalo-sized people who attend most buffets took this as a challenge to eat more than most African nations consume in a year.

All this to say, my favorite part of most buffets is the major boost to your self esteem when you realize you are the fittest person in the room. I am of average weight, but when I go to a pizza buffet, all of a sudden I look like an Olympic athlete.

However, when you go to a salad buffet, the people that are eating there like salad. Meaning they don’t eat cheeseburgers all the time. Meaning they are in shape and I feel just like I do in everyday life. That’s one major knock against salad buffets.

I don’t know what is wrong with salad eaters, but they seem to be entirely too indecisive. This buffet featured a variety of soups to accompany your pile of grass you think kind of looks like food, but it also looks like the stuff you spray weed killer on in your front yard. By variety, I do mean five. Five soups. Not too many, but this was my chance to have some sort of meat. Only, I couldn’t get to the soup.

For five minutes, a woman stood in front of me staring at the soups. For a second I thought she had died but miraculously remained standing upright until she motioned towards a ladle, only to quickly bring her hand back to her side. Should she have tomato? Or maybe chicken noodle…

This woman spent more time thinking about what soup she would like than most people spend deciding who will receive their vote for president. Finally the pressure of choosing the correct soup for the occasion became too much for her and she returned to her table, defeated. I was finally able to select the correct soup and enjoy my meal.