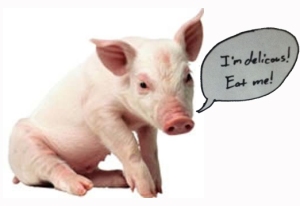 Bob Dylan was right: The times, they are a’changin’ (meant to be read in a strange but oddly appealing voice).
Pork is no longer the other white meat.
The National Pork Board decided, after much debate, to change their famous “The Other White Meat” motto to “Pork: Be Inspired” (I wish I was making this up).
I’m sure your first question is the same question I had: The National Pork Board is a thing? Why would they choose a name like that? Were they choosing between that and The Pig Eater Society?
Your second question was most likely why would pork inspire you? If you are inspired by pork, you are most likely an overweight person who gets winded just walking to the kitchen for another slab of bacon. Marketing your food to this group is very dangerous since they will all most likely die of a heart attack before age 40.
There is no way that is the best motto they could come up with. Take a minute and see what mottos you can dream up. They are most likely better. For instance:

-Pork: Better than Tofu
-Pork: Kosher? No. Delicious? Absolutely.
-Pork: Turkey bacon is for jerks.
-Pork: Always there when you need it.
-Pork: It’s meat.

There are other ways to promote pork. For instance, how much would they have to pay Lady Gaga to wear a dress made of pork instead of beef? She’s a fairly strange individual, so you probably just have to convince its “artistic” and she’ll be all over it.
Maybe pay to have an episode of Glee devoted to pork. Teenagers will do whatever those singing high schoolers tell them to do. If you get the good-looking guy to say “Pork is totally rad, Mr. Schu. We should totally eat while we butcher a modern pop song,“ I guarantee pork sales go up 300%.
If they really want a guaranteed way to promote pork, there is only one thing they have to do.
The NPB should retire to their underground cave (where else would a National Pork Board meet?) and put together the most magnificent and diabolical plan ever created: bring back mad cow disease.
By injecting cows with Mad Cow Disease, America will be forced to find another meat full of cholesterol to eat. That puts pork in prime position to take over the American Meat market.
Congratulations are in order to the NPB, however. Their terrible motto did inspire me to write this. Maybe it’s not as bad of a motto as I thought it was.

3 thoughts on “Pork: No Longer the Other White Meat”